On 11 June, in the Concert Hall “Latvija” in Ventspils, the end of the season will be celebrated with a long-awaited event – the premiere of the quintuple concert “Four Angles” by the composer Krists Auznieks.

The story about the “Four Angles” started a long time ago – long before the opening of the Concert Hall in 2019. While planning the first season, the idea of establishing a new tradition took shape – to commission new pieces of music by bright Latvian composers and well-known composers from abroad on a regular basis, which would be then performed by internationally acclaimed and bright musicians in Ventspils for the very first time. Moreover, these new pieces of music will achieve good interplay with, refer to, embody, and transmit the local folklore, real or fictional. First of them, i.e., the “Four Angles”, tells a legend, still whispered in the city streets, on the well-known, yet for the most people exotic game Novuss and its origins around 100 years ago in Ventspils. The poet Semjons Haņins, being a passionate and skilful Novuss player himself, tells his side of the story about where and, most importantly, how this game, that has already become a national sport, was invented.

Krists Auznieks wrote the “Four Angles” for five soloists – instrumentalists and the string orchestra. However, even before composing the music, he already had a clear idea of the instruments and female soloists. The concert was written for piano, organ, violin, electronics, trumpet, and the said string orchestra. The “Four Angles” will be performed for the first time by the “great five” – the Latvian violinist Kristīne Balana, one of the currently most sought after pianists in New York Vicky Chow, who is already known to Latvian audience, the Paris-based organist Anna Homenya of Belarusian origin, the American musician, composer, and singer Christina Wheeler, and the new promising Norwegian trumpeter Kristina Fransson, together with the musicians of National Chamber Orchestra “Sinfonietta Rīga” with the conductor Artūrs Gailis in the lead. The visual design of the concert was created by a tandem of two Latvian artists and stage designers – Monika Pormale and Katrīna Neiburga.

“Four angles may enclose a seashore, a circle, or a game, but it cannot limit the mind. The mere fact that the sea sweeps the angle off its feet, makes it bend and feel sick – nothing more than sea sickness. Four elbows, the idols of angles crashing against discs – satisfaction from hitting the curvature out of the circle and smashing it in the corner, an angle frozen at zero degrees does not even know if it is a circle or mind beated at an endlessly small point,” recalls the composer Krists Auznieks, talking about his associations and poetry inspired by his imagination, when working on his new composition.

Semjons Haņins, on the other hand, has no doubts as to the origins of the Novuss, i.e., that it was invented a long time ago in Ventspils. Spoken like a true historian and collector of legends and folklore. Before and during the concert, his version in form of a fairy-tale will be fully revealed.

“Finds in various soil layers in the city neighbourhood, as well as their material and shape leads us to think of items of a mystical cult. Their appearance immediately makes us imagine some rituals from the past, e.g., how the ancient locals, Curonians, and Latvians would split a sacrificial animal or bird, while the blood flowed into the cavities and the Gods licked their lips in satisfaction,” explains the poet. 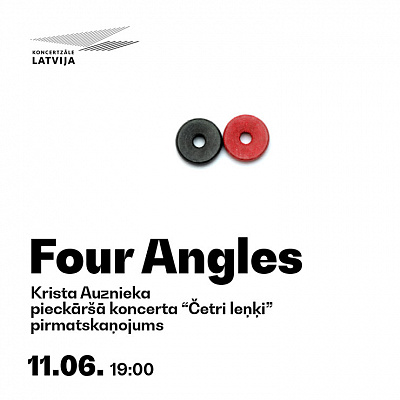